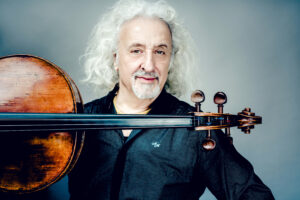 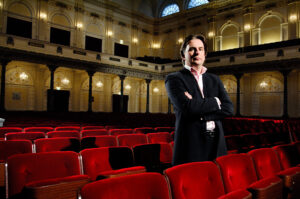 Half Irish, half Hungarian conductor Peter Santa was born in The Netherlands (1967).

Peter started playing a toy violin at the age of three and later studied at the Utrecht Conservatory. During his violin studies the Russian violinist Philipp Hirshhorn had the biggest influence on his musical and instrumental development.

He played many concerts as soloist, chamber musician and orchestral player. In 1989 – after having suffered some back problems – he took up conducting.In 1990 Peter won the Eduard van Beinum Conducting Prize at the Amsterdam Concertgebouw. This was the result of

his participation in an international master class/competition organized by the NOS (Dutch National Broadcasting Company) and the BBC. During this event the Dutch Radio Symphony Orchestra was orchestra in residence and Mr. Hiroyuki Iwaki was Artistic Director.

From then on Peter worked as guest conductor in countries like Portugal, Hungary, Czech Republic, Poland, Germany, Russia, Italy, Norway, Rumania, The Netherlands, Austria, Slovakia and Macedonia. He made numerous recordings for radio and television and toured extensively (the repertoire he conducted ranged from Bach to Takemitsu and the world premiere of Ennio Morricone’s massive cantata – three hours of music – ‘Una Via Crucis’ for orchestra, choir and soloists which was broadcast by Dutch national radio).

In 2003 he founded and became Artistic Director and Principal Conductor of the Amsterdam Symphony Orchestra.
The orchestra has regular concert series at – among other places – its ‘home’ the Concertgebouw (Amsterdam), the Doelen (Rotterdam), the Philips Hall (The Hague), Vredenburg (Utrecht), tours on a regular basis (recently China and Germany including the Berlin Philharmonie) and records for Classix. The orchestra and Peter have been the subject
of two television documentaries and they have also frequently played concerts for Dutch National radio and television companies.

In 2010 Peter founded the Amsterdam Chamber Orchestra. This orchestra consists (in its most basic form) of twelve international string soloists and has the chamber music hall of the Amsterdam Concertgebouw as its home.
The orchestra tours with great soloists like Menahem Pressler, Augustin Dumay, Antonio Meneses and Helen Donath.

Next to his conducting Peter Santa is CEO of Codacapo Music Management, a music production company with over twenty years of (international) experience in organizing classical music events, recordings and tours. In 2018 Peter founded and became Director of the Blaricum Music Festival, a ‘high end’ – ten day – festival during which the top of the international classical music world comes to Blaricum (The Netherlands).