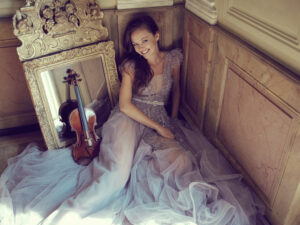 In 2016 she also received the prestigious Fellowship by the Borletti-Buittoni Trust in London.

Future appearances include the return to the Gstaad Festival performing Sibelius Violin Concerto with the Mariinsky Orchestra under Valery Gergiev, the opening of the Transiberian Festival performing Turnage’s Concerto for Two Violins with Vadim Repin under Andris Poga, her debut with the Budapest Festival Orchestra, performing Mozart Violin Concerto No.1 under Gabor Takacs-Nagy, recitals in Berlin, Milano, Torino, Ferrara, Notre-Dame-de-Vie, and a tour in Spain.

Alexandra’s first recording of Prokofiev Violin Sonatas with Michail Liftis, on Aparté, was received with great acclaim: “This recording reveals Conunova as a major artist – in terms of both technical assurance and interpretative daring… I can’t recommend their freshly considered, vividly recorded interpretations highly enough” (Gramophone); “…this is already a candidate for one of the best discs of the year” (The Strad).

In fall 2020, during COVID-19 lockdown and accompanied by an ensemble of friends and colleagues, she released Vivaldi’s Four Seasons also on Aparté, obtaining rave reviews: “her last recording as a whole is an exquisitely light and graceful reading from everyone, crowned by ravishingly sweet-toned and dancing filigree lines from Conunova herself”, “her playing is this fabulous: the warm-toned, easy fluidity of her virtuosities; her range of articulation, colour and shading; the subtle spontaneity; the natural shaping.” (Gramophone)

Nominated “Maître ès Arts” by the Moldavian President, she founded a charity Foundation “ArtaVie” in her home town Chisinau to support talented kids and social programs.

For the last 3 years Alexandra has had the pleasure to work under the guidance and mentoring of one of the world’s leading professors, Edouard Wulfson, in Geneva. 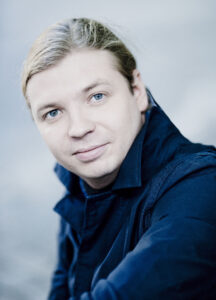