Baritone Raoul Steffani was recently praised by Opernwelt as singing “fresh and lyrically clear, with a sensitive interpretation, from an intelligent theatrical distance.” He is a recipient of the Elisabeth Evertsprijs 2016, the Dutch Classical Talent Audience Award 2018 and the Grachtenfestival Prize 2018. Since May 2021, Raoul has been a member of Equilibrium, the Young Artist Programme of Barbara Hannigan.

In the upcoming season, he makes his  role debut as Ned Keene in Peter Grimes in a spectacular open-air production for Wadopera, and will revive the role of Ramiro in L’heure espagnole at the Opéra de Toulon. On the concert stage, he can be heard in numerous song recitals with pianist Gerold Huber and with Lucie Horsch, for series and festivals such as Oxford Lieder, Kunsthalle Hamburg, TivoliVredenburg, Festivals Vocallis and International Lied Festival Zeist. Other engagements include a New Year operetta tour with Phion, Lieder eines fahrenden Gesellen with Domestica – musicians from the Rotterdam Philharmonic – and engagements with the Residentie Orkest and philharmonie zuidnederland.

In the autumn of 2021, Challenge Records will release his second Lieder album with pianist and song specialist Gerold Huber and mezzosoprano Magdalena Kožená, dedicated to Robert and Clara Schumann. For his debut album Deep in a dream with Gerold Huber, he received much critical acclaim: “This is an exceptionally fine debut recording for an already well-developed singer.” (American Record Guide)

In the 2020/21 season, Raoul was a member of the Studio de L’Opéra National de Lyon led by acclaimed tenor Jean-Paul Fouchécourt. Recent highlights include his international opera debut as Ramiro in L’heure espagnole in Lyon, a streamed concert of Berg’s Vier Gesänge with Barbara Hannigan and the Camerata of the Royal Concertgebouw Orchestra at De Doelen, Brahms’ Ein deutsches Requiem for Dutch television, and various song recitals for NPO Radio 4 and online streaming. Other past highlights include his artistic residency at the Grachtenfestival Amsterdam 2019 and the Prinsengracht Concert.

As a soloist he has worked with conductors such as Sir Mark Elder, Vladimir Jurowsky, David Zinman, Sigiswald Kuijken, Ed Spanjaard, Jos van Veldhoven, Anthony Hermus and Enrico Delamboye. Orchestras with whom he has worked include the Concertgebouw Kamerorkest, Camerata RCO, Camerata Salzburg, the Radio Philharmonic Orchestra, philharmonie zuidnederland, the Orkest van het Oosten and PHION.

As a recitalist, he has already made his recital debut at major concert halls such as the Royal Concertgebouw Amsterdam, Elbphilharmonie Hamburg, and in various series at the Megaron Concert Hall in Athens and in Los Angeles, San Francisco, Spain, Hamburg, Paris, Munich and Vienna. He is a returning guest and ambassador of the International Lied Festival Zeist and he often appears on Dutch national radio and television. 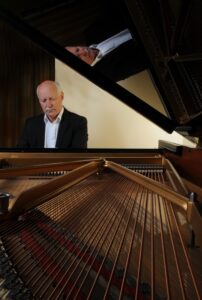 Frans van Tuijl studied with Jan Wijn and graduated at the Schumann Academy. Over the years he has dedicated himself to chamber music and song accompaniment. He attended various masterclasses with among others Jard van Nes, Ulrich Eisenlohr and Rudolf Jansen. Frans worked as a pianist at several international masterclasses, the Christina Deutekom Competition, the International Vocal Compatition in ‘s-Hertogenbosch and at the conservatories of Tilburg and Maastricht. Furthermore, he regularly works with talented young musicians at the Princess Christina Competition and was seen in several television programs, like Una Voce Particolare and the Matthäus and Messiah Masterclass series with baritone Maarten Koningsberger.

Frans made several CD recordings and is part of both the Atrium Piano Trio as well es the Fresnia Piano Trio and Trio Particolare with Peter Lusse.