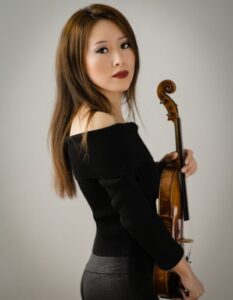 Praised as “a sensitive and absorbing interpreter” (Musical America), Korean-American violinist Elly Suh stands out as a performer whose musical charm, interpretative originality, and unique creative vision breathe fresh life to concert stages around the world.

Suh is celebrated as one of the leading Paganini interpreters of her generation, and is currently undertaking a major recording project of Niccolò Paganini’s 24 Caprices for Solo Violin. Reflecting her modern creative spirit and innovative approach to music, the Paganini Vault project is a narrative audio-visual album – serving as just one example of Suh’s subtle but compelling expansion of the traditional boundaries and expectations of classical music, as we move further into the 21st century.

Alongside her charming interpretations of the major works of the violin literature, Elly Suh is recognised as a major exponent of contemporary works for violin – in particular those by Mario Davidovsky, Ned Rorem, and Jörg Widmann. Herself a talented composer and musical arranger, Suh brings individuality and a unique creative voice to all her performances – often through newly composed cadenzas, improvisations, or orchestral arrangements of both known and unknown works. Her self-composed cadenza for Mozart’s Violin Concerto No.4 in the semi-finals of the Queen Elisabeth Competition for Violin, Belgium (2019) – which incorporated the Belgian National Anthem – was received with enormous popularity and wide critical acclaim, appearing on several major televised news channels.

Born in Seoul in 1989, Suh first began violin lessons at the age of five. Instantly recognized as possessing a fiercely prodigious talent, she went on to enter The Juilliard School’s Pre-College Division in New York at just 10-years-old. Under the tutelage of eminent professors including Robert Mann, Joel Smirnoff, and Sally Thomas, she went on to obtain both her Bachelor’s Degree and her Masters of Music at The Juilliard School, before embarking on post-graduate studies at the Manhattan School of Music. Following this, Suh moved to Europe to undertake post-graduate studies at the Mozarteum University of Salzburg under the guidance of the celebrated violinist Pierre Amoyal.

Elly Suh lives in London, and plays on a Guarneri del Gesù violin on generous loan from an anonymous patron, through the kind assistance of Florian Leonhard Fine Violins. 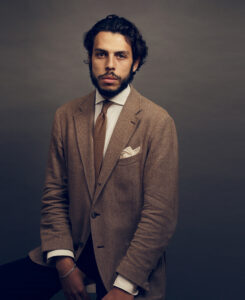 Born in 1992 in Baarn, The Netherlands, into a family of professional musicians: his father is a trumpet player and his mother a violist. The piano, which he took up at age six, quickly became the faithful companion for expressing a love of music that, until today, thrives as much on opera, orchestra, and chamber music as on the piano repertoire. After a highly acclaimed recital in a sold-out Concertgebouw in Amsterdam, Dutch music magazine De Nieuwe Muze dubbed Nicolas “the young freethinker among Dutch pianists”.

Nicolas has performed at the Concertgebouw Amsterdam, Royal Festival Hall London, Philharmonie Berlin, Philharmonie Essen. In addition, other tours have taken him to Cuba, Korea, Italy and France. He has performed with various orchestras under conductors including Jurjen Hempel, Conrad van Alphen, Roderick Cox and Roberto Beltran-Zavala.

In 2013 Nicolas released his debut album with works by Bach, Beethoven and Brahms which was favorably reviewed. 2019 saw the release of Nicolas’ second album, Chopin Sonatas No. 2 & 3, released on vinyl and digital platforms. “Van Poucke brings out Chopin’s strong – sometimes even demonic – side, in both virtuoso and sensitive manner” wrote NRC.

Trouw: “He plays these works with great dedication. and with powerful playing, he brings out the grandeur of the works. This is aristocratic music, even in lyrical passages, which Van Poucke makes convincing. He gives space to poetry, without falling into weakness or inappropriate rubato. “

An accomplished chamber musician he has worked with Colin Carr, Christiaan Bor, Claudio Bohorquez, Marie-Elisabeth Hecker, Godfried Hoogeveen, Gil Sharon, Andreas Reiner, Igor Roma and Pavel Vernikov. With violist Daniel Palmizio he recorded Bach’s complete Gamba sonatas and Brahms Opus 120 which will be released on Zefir Records. Nicolas has been making music together with his sister, cellist Ella van Poucke, for about as long as he can remember. In season 2018/19 they undertook their most ambitious project to date and performed Beethoven’s complete music for piano & cello in Het Concertgebouw Amsterdam and in Berlin.

In the middle of lockdown, Nicolas embarked on a Schumann project resulting in a series of (social distanced)recitals and an album for TRPTK “Nicolas van Poucke – The Schumann Collection vol. l” released in November 2020 and was met with glowing reviews.

The Volkskrant wrote: “Eager, sizzling and astonishing was Robert Schumann’s Carnival by pianist Nicolas van Poucke. As if he had stepped into the shoes of Schumann’s imaginary friends and alter egos, both musically depicted in the work, the dreamy Eusebius and the spirited Florestan; Van Poucke was both.”

In October 2020 Nicolas made his London debut with Chineke! Orchestra and Roderick Cox, performing Beethoven’s third piano concerto in the Royal Festival Hall. The Guardian wrote: “Chineke! gave a secure if stately account of Beethoven’s Piano Concerto No 3 with Nicolas van Poucke an assured soloist.”

In December Nicolas made his debut with the Nederlands Kamerorkest playing Beethoven’s piano concerto No. 4. “His elegant dexterity is impressive, but what resonates the most is how he lets the instrument speak meaningfully. A true poetic musician.” wrote the Volkskrant in the midst of the tour of socially distanced concerts.

Nicolas studied with David Kuyken and Jan Wijn (Conservatory of Amsterdam). Furthermore, he has received the advice of Murray Perahia, Alfred Brendel and Martha Argerich